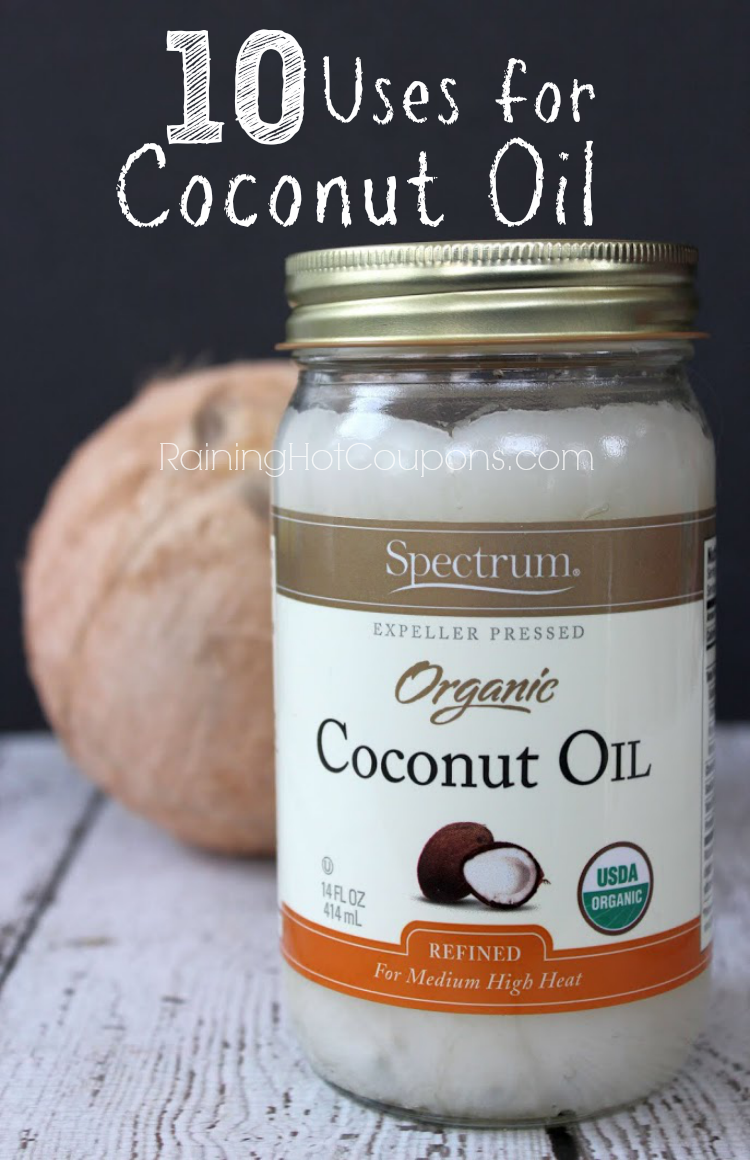 *Pin it* by clicking the PIN button on the image above!

Ever wonder what to do with this amazingly popular stuff?! Coconut Oil that is…it is an amazing product that you can use for a LOT more than just cooking. It’s also extremely good for you so be sure to try and get in as much as you can. 😉 You can pick some up here on Amazon too!

Check out the ideas below:

#1 – Shaving Cream: If you are one of the Robertsons (of Duck Dynasty fame) who somehow got their hands on this list, you can ignore this step entirely (as we all know those beards aren’t coming off anytime soon). However, if you don’t own a successful duck call business, this part might serve you pretty well since the rest of us all need to shave once in a while. Coconut oil can serve as a pretty fine substitute for shaving cream when you’re getting ready to go to work in the morning. Also, if you rubbed the electric razor a little too hard on your skin, coconut oil can also serve as a fine after shave lotion.

#2 – Leather Cleaner and Protector: Alright, Dad’s going through a mid-life crisis. He’s gone out and bought a Harley, got his hair all spiked up and, most horrifying of all, he’s bought a tacky leather jacket. Now, as much as you love him and respect his choice of lifestyle, you are more than a little angry he has no knowledge about caring for that new jacket of his. Thankfully, he also bought several tubs of coconut oil in his lifestyle changing haste, and these tubs will now (unfortunately) save your dad’s  new jacket, as coconut oil serves as a fine leather treating substance.

#3 – Oil For Wood Bowls and Boards: If one doesn’t maintain their woodware properly, the consequences can be rather irritating. Some pretty serious stains can settle in, and smells can linger a lot (I’m not joking; you can be eating a nice salad and you have a chance of catching a whiff of that fish from last week). Coconut oil can serve as a great way to get these tough stains and smells out of your favorite wood bowl and off your usual cutting board. Just use it as you would any other wood treating oil; a fine, thorough rub into the wood and your woodware is fresh once again.

#4 – Lubricant: Ok, if you remember our dad from back at #2, he came home with a Harley-Davidson that’s seen better days. The thing squeaks so much, you’d think he brought rats home with him in that spikey hair of his. Now, the problem is, the police are finally getting on you about these claims of “noise pollution” coming from the garage down in the basement; so you have to clean the thing up because your father’s not here because he’s hanging out with bikers who are half his age. Well, forget the WD-40, as coconut oil serves an extremely effective lubricant, which is just what you need to keep things quiet while your father continues going through this James Dean-esque phase (DISCLAIMER: “Rebel Without A Cause” was a pretty good movie).

#5 – Impromptu Neosporin: Accidents happen a lot around the house in this day and age. Little Jimmy can scrape his knee playing on the play set in the backyard, Frank can give himself a little cut playing with the engine block of the family minivan, etc. Thankfully, coconut oil can keep those minor scrapes from developing into worse things, like infections. Just dab a little of it over any cut, scrape, or scratch and put a Band-Aid on top of that injury. An added bonus is that it smells a lot better than anything you could pick up at the drugstore on the corner.

#6 – Mouthwash: Just ask your children, Agent Cool Blue isn’t the tastiest thing in the world, and even you can attest about the taste of the Listerine on the counter. Now, what if you had something that generally didn’t taste terrible, what if you had something that might actually taste pretty GOOD while your swishing it around in your mouth, getting all the gunk and goo cleaned out? Coconut oil my friend; just toss it around in your mouth for a good 10-15 minutes in the morning to clean your mouth up a bit. When all is said and done, just rinse the leftovers out with water and spit.

#7 – Deodorant: (DISCLAIMER: I’m seriously starting to expect that anything in this world can be used as deodorant; I could honestly write an entire list of all the stuff I’ve seen that can be used as deodorant.) Now, here’s something really unique you’d never expect out of coconut oil; it can also be used as deodorant! Who would’ve thought, huh?! In all seriousness, though, coconut oil is an extremely effective tool that can keep your son’s pits sweet-smelling, and if used in conjunction with baking soda, it can be even more effective. Just massage it in and things will smell a lot less like a gym locker room on a bad Tuesday.

#8 – Moisturizer: While some of the moisturizers we buy at stores smell pretty good, some smell like someone just scooped up some sludge from a pit in Mexico. Some of us don’t want to pay the high prices for the expensive moisturizers. Luckily, most people like the smell of coconut, the mere scent of which invokes images of Hawaiian beaches and Caribbean shores. Thankfully for you, coconut oil is a nice, natural moisturizer that you can use on anything from dry elbows to chapped lips!

#9 – Energy Supplement: Energy drinks lift us up, but they eventually bring us down even lower than when we started. Sometimes a real pick me up is needed to get us through our busy lives. This is where our fine palm-tree-borne friend comes into play. Coconut oil has been proven to give men and women alike nice bursts of energy when things are getting pretty darn droopy-eyed. So, when that heart-attack inducing (It’s been proven by science, can’t argue with that) energy drink starts eyeing you from across the desk, remember to try and slip yourself a small bit of coconut oil and see how that works out (Hey, at least it probably won’t send you to the ER).

#10 – Athlete’s Foot Combatant: You know, with the amount of products that claim to keep Athlete’s Foot at bay, you’d wonder how all of those fancy foot cream companies aren’t out of business these days. Coconut oil also works well at keeping Athlete’s Foot away. A quick massage of the stuff on your foot and you’ll be good for a while.