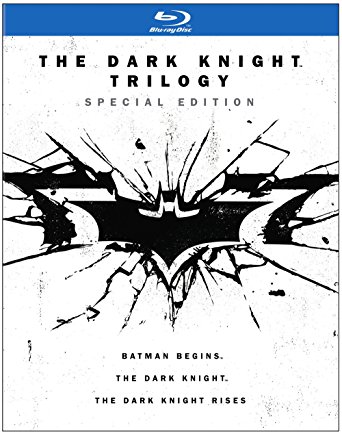 Check out this great movie deal! Right now you can get this Dark Knight Trilogy for only $15.41! This collection would make a wonderful gift idea for any Batman fan! Plus you can get FREE shipping on orders over $25 or if you are an Amazon Prime Member.

Batman Begins: In the wake of his parents’ murders, disillusioned heir Bruce Wayne (Christian Bale) travels the world seeking the means to fight injustice and turn fear against those who prey on the fearful.

The Dark Knight: Christian Bale reprises the role of Batman/Bruce Wayne in his continuing war on crime. With the help of Lt. Jim Gordon (Gary Oldman) and District Attorney Harvey Dent (Aaron Eckhart), Batman sets out to destroy organized crime in Gotham for good. The trio proves effective. But soon they find themselves prey to a rising criminal mastermind known as The Joker (Heath Ledger), who thrusts Gotham into anarchy and forces Batman closer to crossing the fine line between hero and vigilante.

The Dark Knight Rises: Eight years ago, after assuming the blame for D.A. Harvey Den’s death, a disgraced Batman mysteriously vanished. But everything changes with the appearance of a cunning cat burglar and the arrival of Bane, a ruthless madman.